Our niche is refurbishing Herman Miller modular systems. But why? What/who is Herman Miller and why do we choose to specialize in their products? When you think of modern, sleek, ergonomic chairs and office furniture, chances are you’re thinking of a Herman Miller (HM) design. HM is credited with the invention of the modular systems, better known as a cubicle.

A snippet on their history as a company…

HM began in 1905 as Star Furniture Co. in Zeeland, Michigan. Upon change in ownership the name change to Herman Miller Furniture Co., after a co-owner, in 1923 and then settled on its now famous name of Herman Miller in 1960. Beginning in the late 1940s under the guidance of George Nelson, HM produced some of it’s most iconic pieces such as the Noguchi table, Eames lounge chair, and the sling sofa. It was in the 1970s when Don Chadwick and Bill Stumpf joined the company that their beloved Equa and Aeron chairs were born.

So why specialize in refurbishing HM modular systems furniture?

Because it is arguably the best in the business. As a company, HM has been on Fortune Magazine’s “Most Admired Companies” list, consecutively, for the past 18 years. Not only that, their sustainability practices have continuously been ahead of their industry. By 2020, HM plans to achieve it’s “Perfect Vision” goal. This includes zero landfill, zero hazardous waste generation, zero air emissions, zero process water use, 100% green electrical energy use, company buildings constructed to a minimum LEED silver certification, and 100% of sales from DfE-approved products. Even their designs are made to be ecologically sound, with many being examples of ecodesign techniques for achieving sustainability including saving materials, energy efficient manufacturing, recycled content and recyclable content (which is even 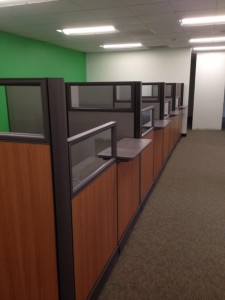 included in its disassembly).

HM is a company built on design, with the greater good in mind. We believe in their company goals, and stand behind their products. Their products are made of renewable materials, meant to stand the test of time, we just make them match your office at a price you can afford.

Click the button below to browse our latest styles!